The information, which updates the authors’ previous analysis of English Hospital Episode Statistics (HES) from 2013/14, shows that emergency hospital admissions for people with MS in England increased by 12.7 percent over the two years to 2015/16.

However, a large proportion of this emergency care was for problems which could have been avoided with proactive, preventative care and earlier diagnosis and intervention in the community.

For example, the report found that urinary tract infections accounted for 14 percent of emergency admissions for MS in 2015/16 and they cost £2,639 per patient; while respiratory issues cost the NHS a total of £5.4m.   Overall, admissions for bladder and bowel related issues for people with MS cost £10.4m in 2015/16.

The report found that nearly one in five of the 89,030 people living with MS in England were admitted to hospital as an emergency in 2015/16.  The average cost per admission was £1,733 and the average length of stay was 8.2 days.

Sue Thomas, CEO of the Commissioning Excellence Directorate for Wilmington Healthcare, said: “Our latest report shows that the problems we highlighted in our original 2013/14 analysis have increased in the past couple of years. A growing number of patients with MS are being admitted to hospital for emergency care; yet many of these admissions could have been avoided with earlier intervention.

“Preventative care strategies for people with MS must be reviewed in order to tackle problems, such as respiratory and urinary tract infections, at an early stage to try to avert the need for emergency care. This would not only be of huge benefit to patients, it would also reduce pressure on struggling A&E departments.”

Pam Macfarlane, Chief Executive of the MS Trust, which provides information for people with MS and supports MS specialist services, said: “It is disappointing to see that avoidable emergency hospital admissions for people with MS have continued to rise in 2015/16.

“Last November, the MS Trust brought together partners from across the MS sector to publish the MS Forward View consensus. This showed that people with MS need a flexible blend of care, comprising disease modification and also proactive symptom management and neurorehabilitation, delivered by multidisciplinary teams. This is one reason why we are now funding additional MS nurses in areas of the UK where services are the most overstretched. Only with the right specialist and community based support will we reduce the need for emergency hospital care for people with MS.” 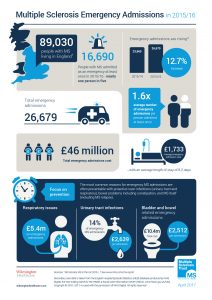 We are delighted to invite you to register for our on-demand webinar - Looking ahead 2023: Supporting a critically challenged NHS The webinar took...

[Download] The NHS Crisis: what it means for Industry

Download our latest white paper that looks at the current challenges of the NHS – in capacity, workforce, finance and integration – and explores...